These small hotels are big on style. 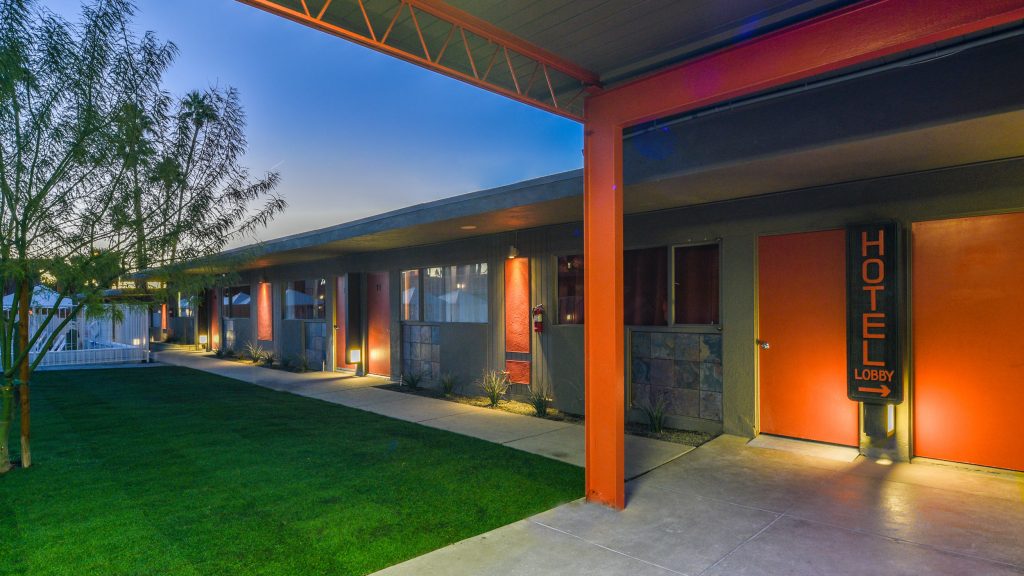 The mid-century modern style generally came about through the International and Bauhaus movements from the mid-1930’s to the mid-1960’s. The style is all about openness, favouring large windows that spread ample sunlight around wide open floor plans. Many mid-century modern layouts include post and beam architecture where horizontal beams are supported by vertical posts, creating soaring ceilings.

In Palm Springs, California many mid-century modern architects built homes and public buildings, including many smaller hotels. Staying in a smaller hotel gives you a chance to get some privacy, interact with hands-on owners, and to get to know other guests.

Check out these beautiful examples of the most well-known mid-century modern style attractions in the area.

Built in 1955, the Skylark Hotel is a prime example of mid-century modern architecture in the Palm Springs area. Boasting mahogany and walnut furniture influenced by Danish architecture, the hotel strayed from the mid-century modern theme throughout the years but was completely restored in 2013 to match a photo that was taken the year it was built.

The color theme is the retro orange-ish tint and all of the rooms have big glass windows that show off the great desert views. Set in the heart of Palm Springs, the hotel is surrounded by palm trees and mountains that can be enjoyed while relaxing by the outdoor pool. Under new ownership as of 2018, the Skylark Hotel is currently undergoing more renovations to make sure the hotel keeps the 1950’s vibe.

Renowned architect Hugh Kaptur created this gem at the base of the San Jacinto Mountains in 1967. The open rooms feature all of the basic amenities including headboards with the wooden mid-century modern look as well as other furniture that is simple yet elegant. Guests typically rave about sitting by the pool in the wooden pool chairs and basking in the sun under the palm trees. Although the hotel has undergone some restoration and updates within the past few years, the owners have largely maintained its original the mid-century modern look. 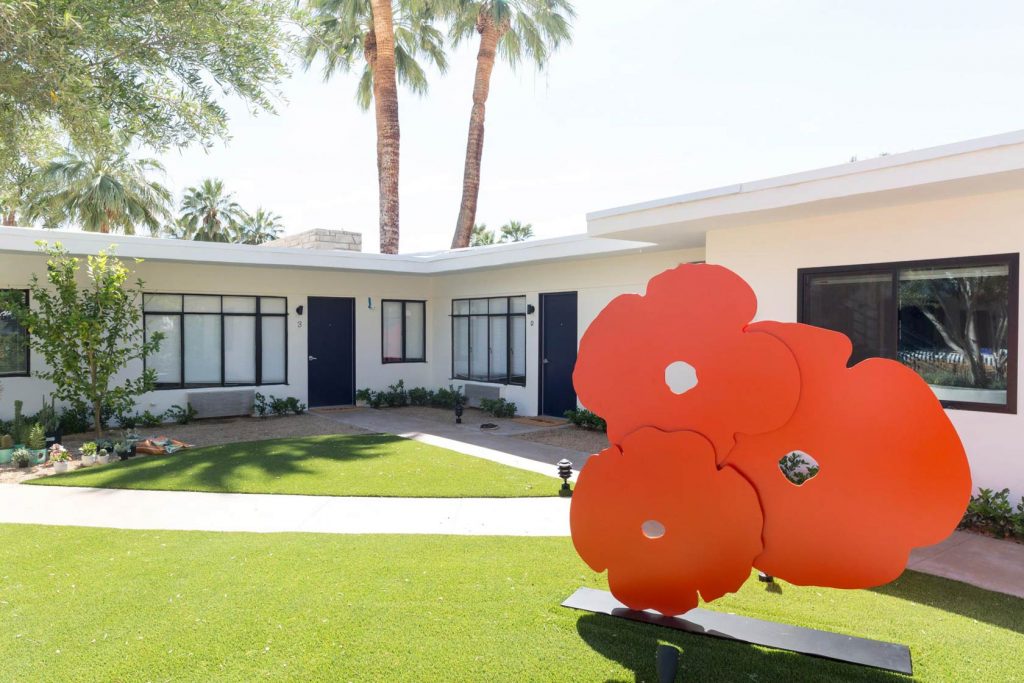 Opened in 1951, Holiday House Palm Springs was designed by architect Herbert W. Burns and has since been updated by Mark D. Sikes. Perhaps what makes this hotel most unique is the fact that it promotes the concept of community and conversation, and therefore doesn’t put televisions in the rooms.

Taking on a light blue theme, this hotel features wide open guest rooms that are categorized as “Good,” “Better,” or “Best.” A great word to describe some of the features such as the kitchenettes in some rooms has been “whimsical,” with simple touches that give them a 1950’s flair.

The Palm Springs Rendezvous Hotel was created by architect William Cody in the 1930s and has always been an inviting place for visitors to stay. In typical Palm Springs fashion, this hotel which bills itself as the ‘retro hotel in Palm Springs’ also takes on the mid-century modern theme with retro decor that varies in color throughout the hotel, from green to blue and more. The “Pretty in Pink” room is the most notable, as Marilyn Monroe once stayed in it.

Allen and Joanne Petty designed the Desert Hills Hotel in 1956 and it has retained the 1950’s midcentury modern hotel feel throughout the years. Featuring 15 different rooms, this hotel mainly takes on retro blue and green themes while keeping the simple mid-century modern wooden look in many areas. Of course, the rooms are large and spacious and include big glass doors leading out to the lavish swimming pool and firepit. 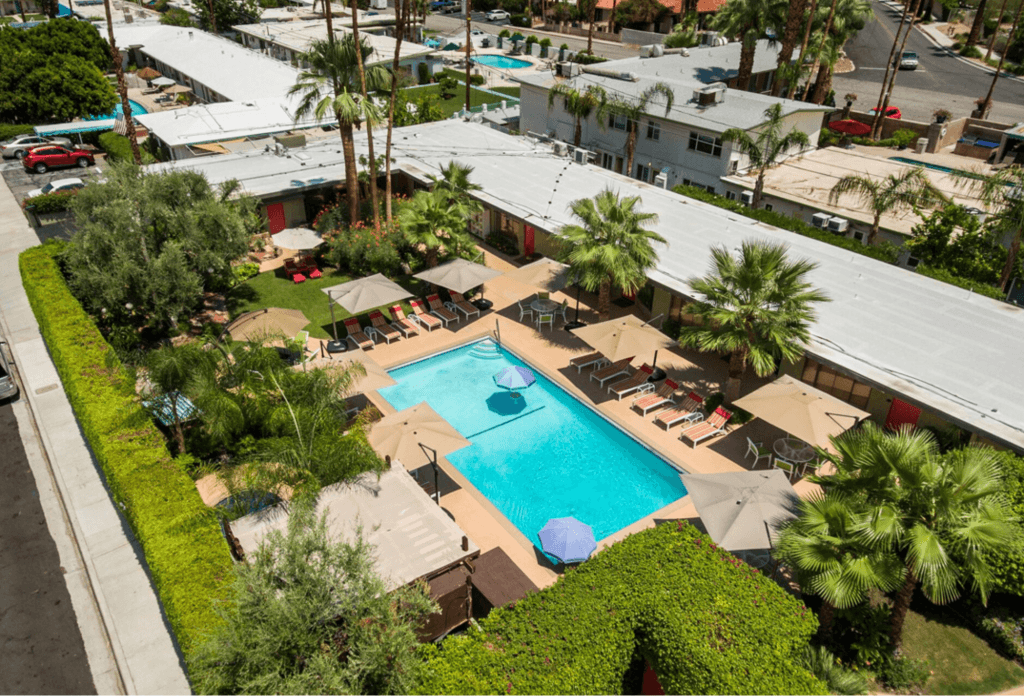 Also designed by Herbert W. Burns, the Desert Riviera Hotel was built in 1951 and has kept the theme of mid-century modern architecture including unique but matching color themes. Most rooms offer the typical large windows looking out at the pool and beautiful scenery, and the tile is the original tile that was put in when the hotel was built. Rounded lamps are set perfectly around the rooms and much of the furniture is made of wood. The hotel, which includes just 11 guest rooms, had previously been made into apartments before being restored into a modernist hotel.

Set in downtown Palm Springs, the Three Fifty Hotel features ten rooms designed by Herbert W. Burns. Interior designer Laura Slipak renovated the hotel in 2017 and kept most of the mid-century modern hotel decor while adding some hints of chic minimalist style. High wooden ceilings soar over the mostly-white rooms and the rooms feature huge glass doors to allow the California sunlight in. This hotel is pet-friendly and also has the Whispers Spa and the Azucar Restaurant on-site. 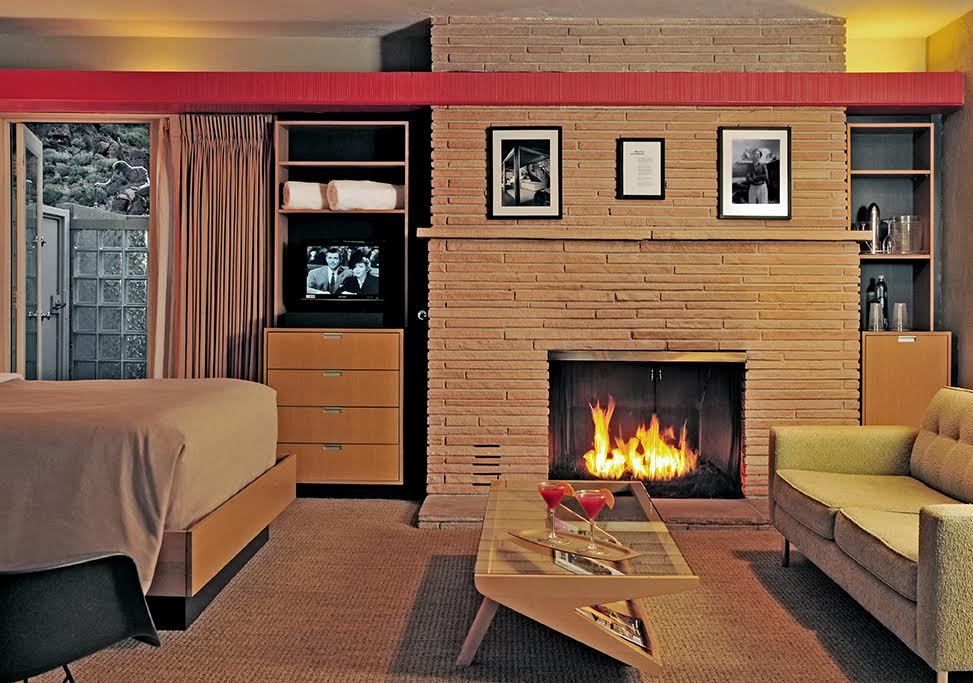 Orbit In. Photo courtesy Orbit In

Herbert W. Burns also created the Orbit In in 1957. This hotel features huge rooms that have quaint and kitschy kitchenettes and sitting areas. The current owners, Kevin and Jinny, were guests at the hotel in 2004 and immediately fell in love with the decor and the vibe, so they decided to buy it and keep the theme. The rooms each have their own retro color theme and feature furniture that was influenced by mid-century modern artists themselves. The mountain views are raved about and the hotel has hosted many famous people including Albert Einstein.

Situated in the Old Las Palmas neighborhood of Palm Springs, the Weekend Hotel is another favorite of guests who appreciate the mid-century modern hotel look. The hotel was built in the 1960’s and has gone through millions of dollars of renovations that all keep the original appearance. The guest rooms are roomy and feature simple wooden furniture and various color themes. The wood floors are also a unique touch that help preserve the mid-century modern feel, and each room offers a private patio surrounded by a wooden fence.

The Ruby Montana’s Coral Sands Inn is an awe-inspiring place to stay for those who want to feel like they went back in time. This hotel is small, as it only has 6 rooms, but each room holds memorabilia from the past. This hotel is unmissable, as the outside is painted in a retro pink tone and features retro lighting all around. Just as you would expect a Palm Springs hotel to be, this one hosts friendly guests and the owner, Ruby, is very interactive with guests and provides a cozy at-home feel.

Overall, there are many small hotels with a midcentury modern vibe where you can stay in the Palm Springs area that embody the open, flowing mid-century modern architecture theme. Each one guarantees a fun and friendly stay!