Seeing celebrity homes is one thing, but did you know you can actually rent some famous houses and stay in them, just like a star?

Coolest & Most Famous Homes You Can Rent in Palm Springs 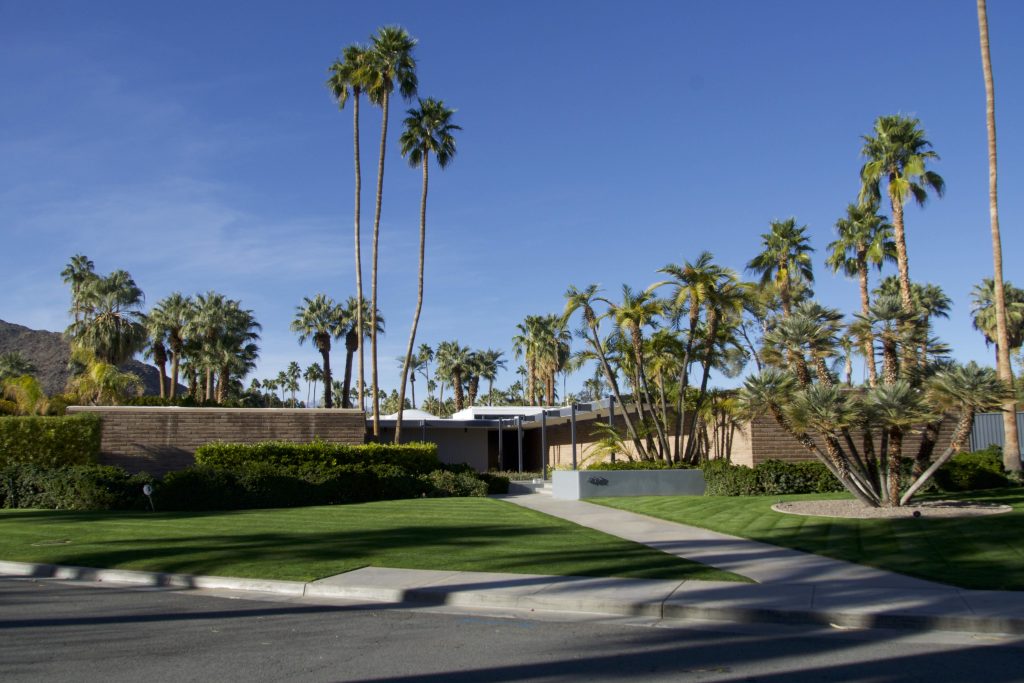 Palm Springs has always been a hot spot for great homes and exquisite architecture, with many celebrities and high-profile figures investing in real estate in the area. Most of the homes are no longer inhabited by the celebrities themselves, but they are able to be rented out to the public for events or overnight stays. The following are just a few select options to choose from if you are looking to stay in a famous Palm Springs home. And remember that if you want to check out some celebrity homes and see amazing architecture, you can take a driving tour of modern architecture with Modern Tours Palm Springs; see the available tours here.

Perhaps one of the best homes to rent out in Palm Springs is Leonardo DiCaprio’s house at 432 Hermosa. While the house does come with a high price tag of $4,500 per night, the place is huge and can accommodate numerous guests. The home has 6 bedrooms and 7.5 bathrooms spanning across a massive 1.3 acres of land, and Donald Wexler originally designed the home in the mid-1960s for celebrity Dinah Shore. The home is tucked away and not fully visible to outsiders, and interestingly enough, guests find no signs that “Leo” owns the place, as there are no memorabilia of his works.

The living room is fully updated with the latest technology, including a TV that retracts into the ceiling, and the kitchen is advertised as “deluxe” for good reasons, as it is huge and offers plenty of cooking utensils and appliances. The exterior of the gated home is also beautiful, featuring a bar, a pool, a tennis court, a 1-bedroom “casita,” and fireplaces all around for guests who want to socialize outdoors on chilly evenings.

Bing Crosby, one of America’s most renowned singers, actors, and comedians, also got into the real estate rush in the Palm Springs area during the 1950’s. The Bing Crosby Estate, also sometimes referred to as his Thunderbird Heights house, is located in a private community outside Palm Springs in Rancho Mirage. Rancho Mirage itself is known to be a place of prominence, as it is nicknamed the “Playground of the Presidents” because so many high-profile people resided and visited here (e.g. JFK). The estate is situated on 7000 square feet of land and features amazing handmade furnishings and updated amenities and electronics for visitors. Several mid-century Hollywood trinkets are scattered throughout the home, which also has a beautiful pool and outdoor BBQ pit, a billiards room, and a full inside bar.

Other amenities the house includes are dartboards, a putting green, a Jacuzzi, and lavish patio seating for outdoor entertainment. The backyard is expansive and perfect for enjoying a lazy day and evening outdoors. The nightly price of staying in the home normally fluctuates between $700 and $1100 depending on the time of the year.

The architectural gem at 1148 East Alejo Road in Palm Springs was created by E. Stewart Williams in 1947. The plans for the house were initially to build it with more of a Georgian style, but Sinatra and Williams agreed to give the home more of a “desert” feeling as well as make the lines cleaner, flatter, and more symmetrical than originally planned. The 4,500 square foot house used to have a recording studio that is no longer operational. 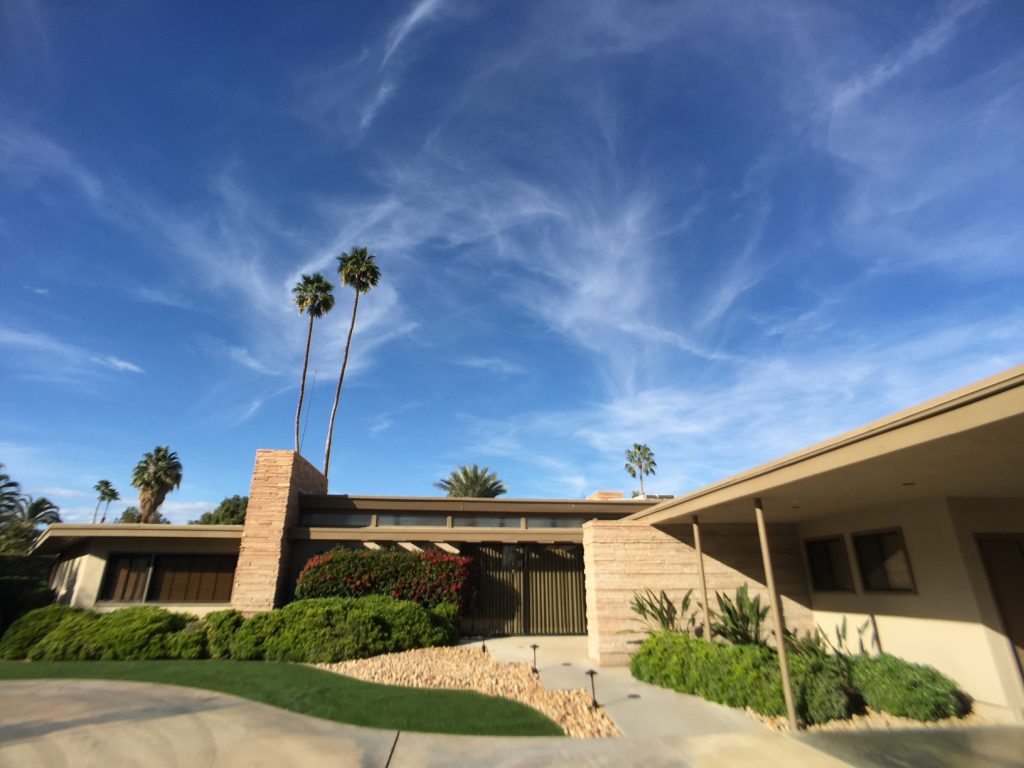 In 1948, Sinatra and his second wife, Ava Gardner, resided in the house together and used to throw enormous parties for high profile celebrities and Hollywood figures. Sinatra‘s relationship with Gardner was quite volatile, and most documentation about this home includes the story of how Sinatra threw a champagne bottle at Gardner, which left a crack in a sink that remains today. This 4-bedroom, 7-bathroom house features a piano-shaped pool and has been used for television shows and movies, including The Damned Don’t Cry starring Joan Crawford. Sinatra resided in the house for 10 years and moved out in 1957 after his unsurprising divorce from Gardner, and the house can be rented out for approximately $2,600 a night.

Elizabeth Taylor, one of Hollywood’s most renowned celebrities, transferred with her family from England to California around 1940, which was when she started her career as a childhood star. She would go on to win many awards and star in several notable films including 1967’s Who’s afraid of Virginia Woolf?, but she is also known for being associated with her breathtaking house in Palm Springs’ Las Palmas neighborhood. The house, also known as Taylor‘s “Casita” or “The Jewel of the Desert,” is located at the bottom of the San Jacinto Mountains and is perfect for guests who are looking to gather and spend time together in a luxurious home.

The house has 3 bedrooms and 3.5 bathrooms along with a casita that has a separate bathroom and bathroom. Kathy Ireland designed the home, which includes enormous glass doors that provide great views of the mountains and fancy touches such as a crystal chandelier and expensive, antique furniture and decor. Some of Taylor‘s possessions also remain in the home, including a portrait of herself painted by Andy Warhol. Some of her own artwork is also featured as well as some of the possessions that she gathered during her travels around the world. “Casa Elizabeth” can be rented out for around $550 per night.

Best celebrity homes you can rent in Palm Springs

Another incredible place to stay is in Sonny & Cher’s Villa Carmelita. This private, gated estate features five bedrooms and 4.5 bathrooms. Guests can even bring their dogs! The courtyard has a large pool and there is also a spa and an outdoor living room with a fireplace. Even though it is known as Sonny & Cher’s home, it was originally built in 1930 for Joseph Cotten (think Citizen Kane). The home was recently redone by California designer Rudi Polak and now features mostly brown, black, and white tones with occasional bursts of color including bright red pool chairs. The spacious kitchen allows guests to cook full meals at the house and there is a built-in patio grill and a ping pong table by the jacuzzi. Travelers looking for a cozy, quiet getaway can rent this house for an average of $1,400 per night.

Howard Hughes, considered one of the most successful businessmen in history, was also the former owner of a Palm Springs real estate gem. Deemed his “Mini Estate,” the three-bedroom home was built in 1957 and was owned by Hughes until 1976 when he passed away. Owners after him included Eva Gabor and Paul Keyes, while celebrities including Smokey Robinson sometimes stayed there while vacationing. The home is one of the best places for those looking to stay somewhere that exhibits authentic mid-century modern architecture, and another aspect making this house unique is that it is two stories, unlike most houses in the area that are just one level. The house is perfectly finished with tall glass windows, spacious rooms, and random pops of orange, yellow, and blue. Of course, there is a pool behind the house as well as a sundeck on the second floor of the house for guests to sit on and relax while looking out at the unforgettable mountains and palm trees. You can rent out this house for around $625 per night depending on the rates at the time of booking.

Mervyn Edward Griffin Jr., better known as Merv Griffin, is best known for his role as the talk show host on The Merv Griffin Show, which ran from 1965 to 1986. His estate is one of the more expensive ones to stay at, as it costs an average of $8,200 a night and has a three-day minimum stay. The house is enormous, though, and has a total of 13 large bedrooms throughout the main house and guest houses. The design of the place was inspired by Yves St. Laurent’s villa in Marrakesh.

This estate also has one of the biggest swimming pools compared to other famous houses, and it interestingly has a “floating” cabana in it. There is a horse race track as well, because Griffin loved raising and training horses. There are plenty of terraces to lounge on and take in the mountainous views, and there is also a 2.5-acre lake within the 39-acre estate where guests can even take a paddle boat ride. Guests oftentimes say their favorite indoor room is the living room, which is massive and has several large couches to relax on.

The desert gem at 2688 South Camino Real in Palm Springs was one of Walt and Lillian Disney’s vacation destinations. Perhaps a nod to the up-and-coming color television technology in the 1950’s and 1960’s (as opposed to black and white), Walt decided to make it eccentric with interesting art pieces, big glass walls, and noticeable pops of colors, especially yellows and blues. Unfortunately, Walt only got to enjoy the home for a few years before he passed away, but the home remained in the Disney family until 2015 when it was surprisingly only sold for under $1 million. The new owners chose to keep using the home as a vacation rental, and they have placed Disney memorabilia and other touches of Walt’s works including some of his quotes painted in the closets. While the home doesn’t have as many of the luxurious amenities as some of the others on this list, the house has a garage, a fireplace, a pool, and a wonderful spa to relax in. You can rent the 4-bedroom, 4-bathroom house for around $350 per night, depending on the time of year. 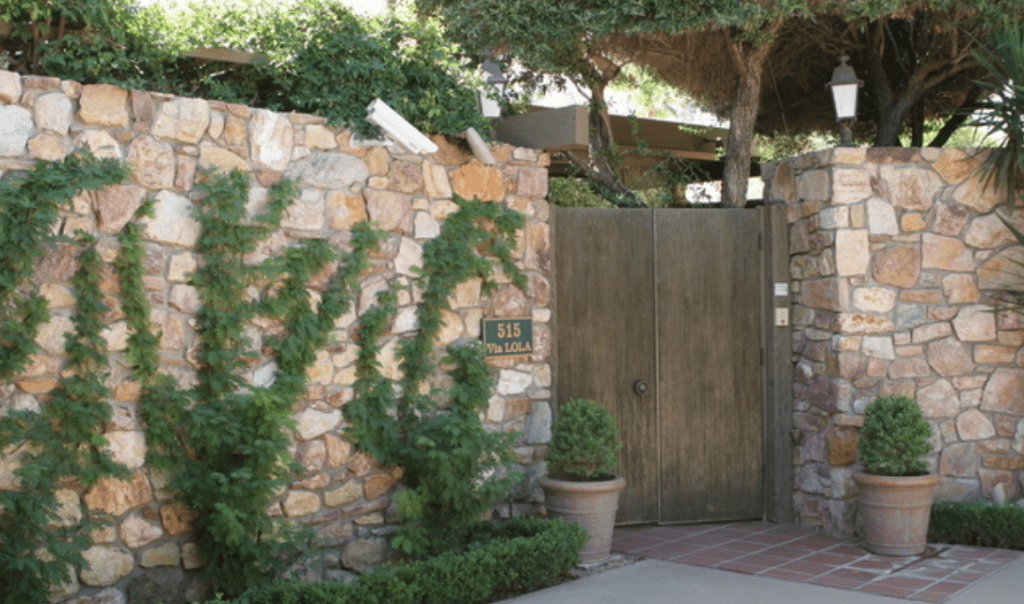 Oscar-winning Kirk Douglas and his family resided in this beautiful home in the El Mirador neighborhood of Palm Springs for almost five decades and now travelers can rent it out for around $800 a night. The 4-bedroom, 3-bathroom house was built in 1954 and exhibits an authentic mid-century modern vibe, seeing as it was another beauty designed by Donald Wexler. Of course, the walls and doors are tall glass and the post-and-beam ceilings are directly from the typical “mid mod” style handbook (if there was such a thing). Guests who stay here can enjoy a wet bar, a fireplace, a fire pit, a spa, a huge kitchen, a tennis court, a pool, and a huge terrace that looks out at the massive mountains. There is also a pavilion that was added on in the mid-1970s and features a slew of vintage posters from movies that Douglas starred in.

Last but certainly not least, the Desert Star at 1611 S. Calle Palo Fierro is a fantastic place to be. Designed by Howard Lapham in 1956, the property is made up of six studio condominiums as well as the two-bedroom “host” condominium. Owners either live here themselves or rent their condos out to guests or long-term renters. The Desert Star is a Class 1 Historic Site in Palm Springs, meaning the mid-century modern architecture and theme are here to stay and cannot be changed. Each studio condominium is 600 square feet with private patios and the property also has a heated salt water pool.  Some of the patterns are the same as they were in the 1950’s and furniture all throughout the condos and the exterior features mid-century modern themes including unique furniture and touches of retro oranges, greens, and yellows. The quiet, peaceful condos can be rented out at various fees depending on the owners, but generally prices start around $200 a night.

If you’re planning a vacation to Palm Springs, forget the chain hotels and rent out one of the incredible dwellings outlined above – you won’t regret it!  Pair your stay with a fantastic and fun modern architecture or celebrity tour for the ultimate Palm Springs experience.