It's a home made most famous by one of its guests. Elvis Presley’s Honeymoon Hideaway estate, also known as The House of Tomorrow, was originally owned by developer Robert Alexander and designed by modernist architect William Krisel. 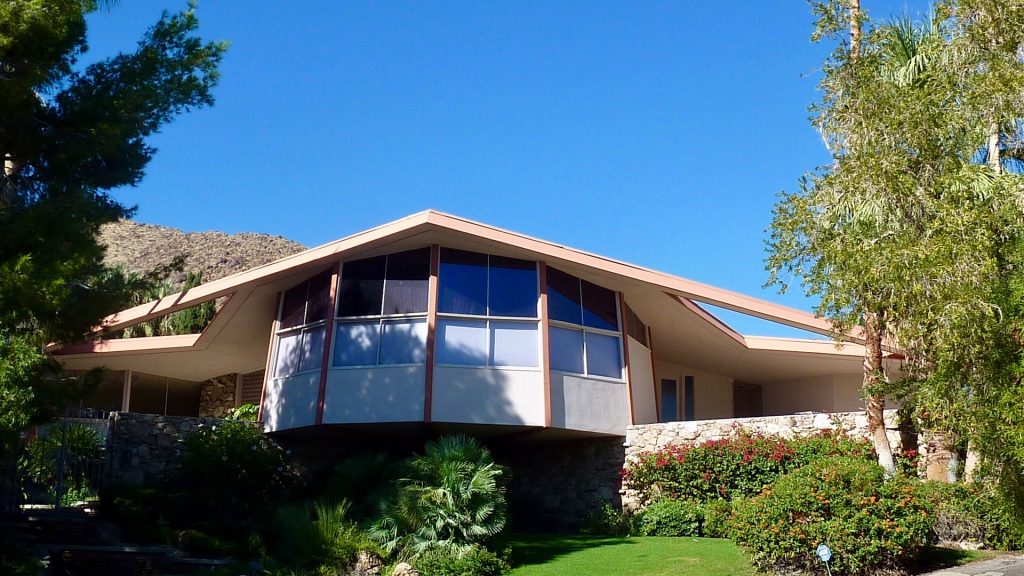 Before Presley made this house a tourist destination, Alexander decided to create this one-of-a-kind home for his wife, Helene, and their family in the early 1960’s, shortly after moving to Palm Springs. Helene is given different levels of credit for her input into the home's design, but it does seem she had a hand in the project to some degree. The home was constructed by the Alexander Construction Company (operated by Robert and his father, George) and the Alexanders built thousands of homes and many other large scale projects in the Palm Springs area. The Alexander Construction Company is also famous for developments such as the Ocotillo Lodge and celebrity homes in the Las Palmas neighborhood.

The company took on many high-end assignments over time, but more admirably, the company also built more than two thousand homes in Palm Springs that provided more affordable living options using the same modernist design caliber. In collaboration with another architecture firm, Palmer and Krisel, affordable tract homes in the Palm Springs were designed and built over the course of many years. The Twin Palm Estates neighborhood is just one example. This neighborhood includes homes at approximately 1,200 square feet, each with palm trees and an in-ground pool. All of the houses in this neighborhood were sold for $30,000 in the 1950’s and 60’s, which is equal to a home buyer spending around $250,000 today. In Palm Springs, that's a steal of a deal! 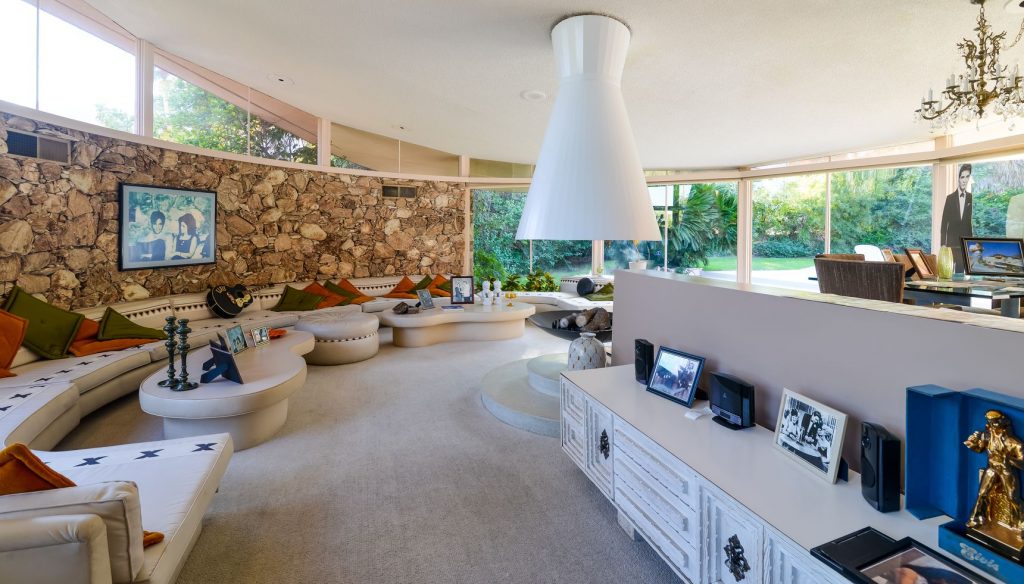 Located at the bottom of the San Jacinto Mountains, the Honeymoon Hideaway is a 5,000 square foot home and has three levels, four bedrooms, and five bathrooms. Located at 1350 Ladera Circle in Palms Springs, California, this house can hold up to 180 guests at a time. As if this doesn’t seem spacious and glamorous enough, the structure was actually built as four circles—no sharp turns in this house!

The home has a large, pentagon shaped pool at the back of the house, hidden by trees and other foliage surrounding the property. Other outdoor features include a beautifully kept garden, a charming waterfall fixture, a fruit orchard, and even a tennis court. The entire house was skillfully restored in the 1990’s with the design remaining true to its 1960’s flare. As an added bonus, from the back of the house, you can see Marylin Monroe’s former dwelling.

What's inside the House of Tomorrow?

The home features walls made of natural stone, and almost any wall that is not stone is floor-to-ceiling windows. The living room includes a built-in retro couch wrapped around the rounded wall. There is a small den off of the living room decorated with animal skin rug and furniture. The kitchen has plenty of counter space and cabinets surrounding a circular island with five cooktop burners and an indoor grill. The gigantic stainless-steel refrigerator in this kitchen is fit for a chef. Connecting these shared living spaces to the bedrooms and bathrooms are hallways lined with Elvis Presley memorabilia—photos, records, and posters all included. 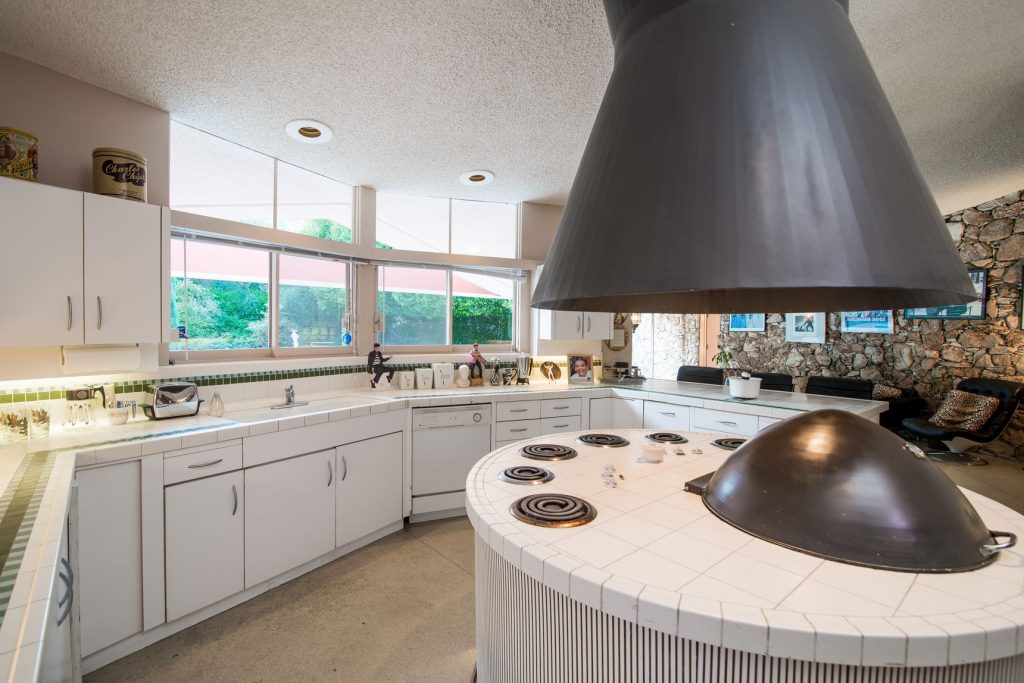 The upstairs bedroom is considered the honeymoon suite, offering a romantic panoramic view of the Coachella Valley and Santa Rosa Mountains.The master ensuite’s floor is tiled black and white with a deep soaker tub smack dab in the middle.There are plenty of other interesting features within the home, such as a classic jukebox, equipped with some of Elvis’ best hits, of course.

How did House of Tomorrow get its name?

The Palm Springs estate caught the attention of the media almost immediately after it was completed. The house premiered as a centerfold in Look magazine in 1962, where it earned the name The House of Tomorrow. Only a few years after this debut, from 1966 to 1967, heartthrob crooner Elvis Presley decided to lease the house at a whopping $21,000 for the year.

Elvis and Priscilla originally planned to marry here, but the press caught wind of wedding rumors so the couple ultimately decided to sneak out of the house and flee to Las Vegas to get hitched instead. Afterwards, the lovebirds ended up returning to the home for their honeymoon, leading up to the famous nickname, Elvis' Honeymoon Hideaway. It's said that Elvis carried Priscilla through the front door singing the “Hawaiian Wedding Song.” Lisa Marie Presley, their daughter, was introduced into the world exactly nine months later.

The Honeymoon Hideaway is not the only popular celebrity getaway in Palm Springs. So-called hideaway homes became very popular in middle of the twentieth century and Palm Springs became the city to run to. 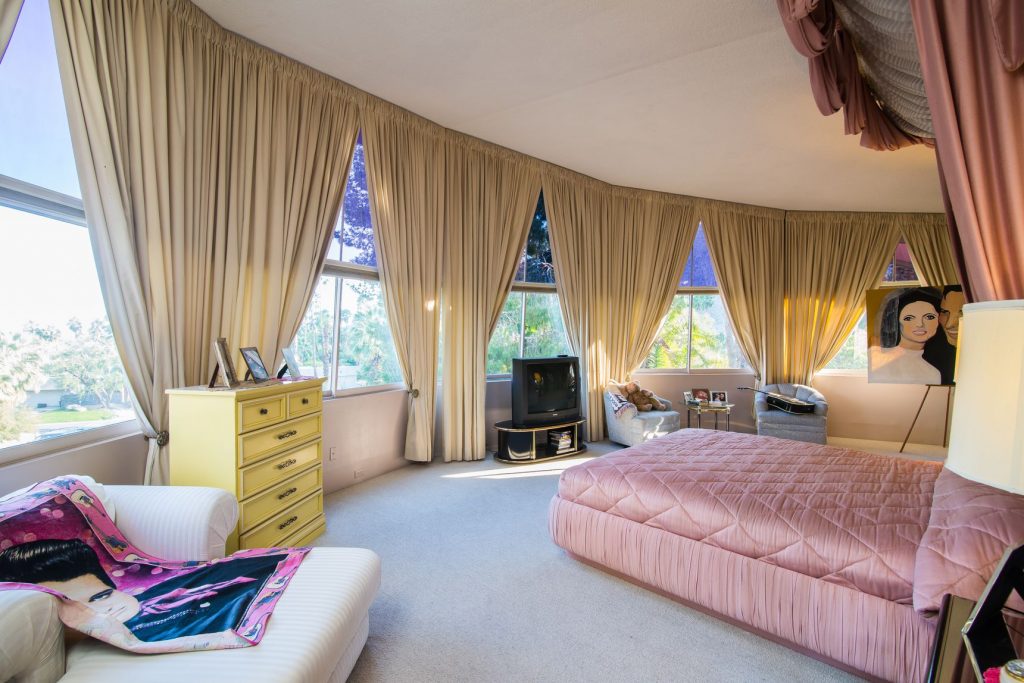 Because Palm Springs is near Hollywood, icons like Elvis and Priscilla Presley, Bob Hope, Cary Grant, Elizabeth Taylor, Frank Sinatra, and countless others purchased or leased in the area to be able to escape the spotlight of celebrity for a few days. Former president Ronald Reagan and his wife Nancy would also escape to Palm Springs every once in a while, and the city has been earnig its reputation as a playground for the rich and famous ever since. Other notable vacationers include Robert Downey Junior and even former U.S. President Barack Obama and his family.

The home is clearly visible from the street on its quiet cul-de-sac, and it's easy to snap a photo or a selfie out front but remember to be respectful of private property and keep only to public areas. The home has been known to open for tours and private events. Elvis Presley’s ‘Honeymoon Hideaway’ was put on the market for $5.9 million in late 2017, and it is uncertain whether the new owners will continue to allow tours.