This undulating roof is mesmerizing

Have you heard about the ultra modern mid-century classic home known as the Wave House? Want to see it? Here's what to expect...

Getting to know the Miles C. Bates Home: The “Wave House” 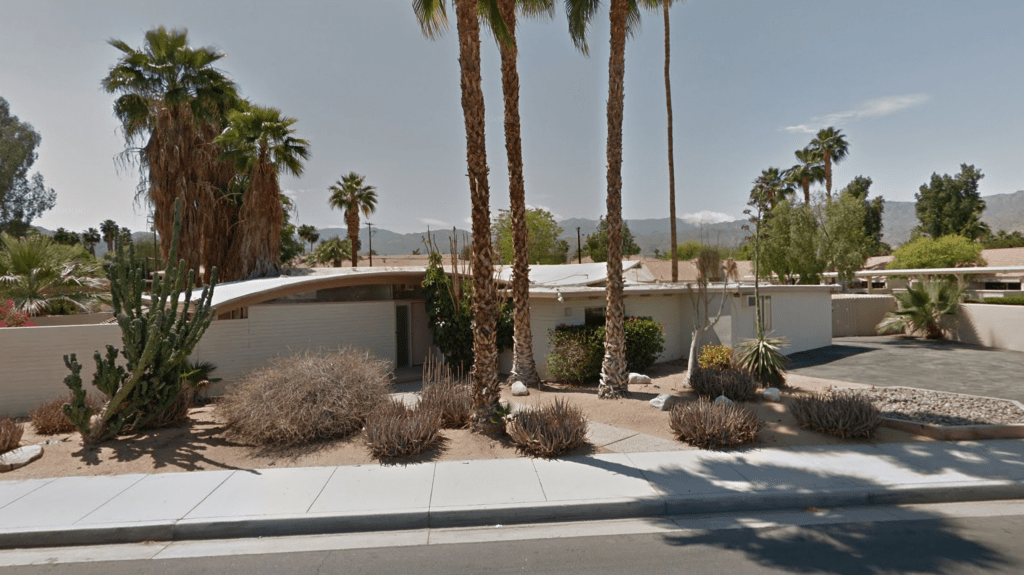 While some visitors come for the desert heat, or perhaps for one of the many events or festivals like Coachella, or the Palm Springs International Film Festival, one of the other major draws is the architecture. Modernism Week, a showcase of the city’s unique midcentury modern architecture and design, is a huge annual pilgrimage.

While you can take in the events and ride along on tours, you can also just explore the amazing homes and buildings on your own, whether by Googling for famous places, or getting an online-guided self-driving tour like those offered by ModernToursPalm Springs.com to take you around.

An amazing home can be found in Palm Desert. While palm Springs gets all the press, Palm Desert is no stranger to amazing architecture, and the Miles C. Bates Home is no exception. Also referred to as “The Wave House,” this home was built by renowned architect Walter S. White in 1955. White worked throughout the Coachella Valley during the 1950s and designed dozens of homes there including the Dr. Franz Alexander House in Palm Springs, which earned a spot on the National Register of Historic Places. He worked in Colorado throughout the 1960s before returning to California and is known for stating, “of the 300 residences designed I have built approximately 15% of them myself.”

Miles C. Bates was an entrepreneur who not only had a knack for the arts but also loved to entertain, meaning he would host well-known celebrities at his home, which included famous actors, singers, musicians, and artists. Bates was popular in the area because he was easily noticeable driving his specialized gull-wing Mercedes convertible to and from the popular home at 73697 Santa Rosa Way. The lawn in front of the home features desert landscaping including many cacti and, of course, palm trees are scattered throughout the exterior and beyond.

The one-bedroom, two-bathroom home only spans 800 square feet, which is quite small compared to other infamous homes in the area (e.g. Frank Sinatra’s 4,500 square feet estate). The house was given the nickname “The Wave House” because it has a unique roof that was actually formally patented by White himself. The roof was made using wooden dowels from custom Douglas fir, which is in stark contrast to the typical steel beams that can be found in the roofs of most other mid-century modern homes. The “wave” consists of bi-concave designs that closely resemble the San Jacinto Mountains that sit behind the house. The roof was also made with very little insulation, making many believe it was meant to be a summer home.

Although the roof’s Douglas fir dowels don’t fit the typical mid-century modern vibe, the high floor-to-ceiling windows certainly do. As with other homes in the area, these allowed a lot of California’s natural light to illuminate much of the Wave House. The floors were originally a vibrant white color coupled with gray stone aggregate and unique brass dividers. Decades later, architects still comment on how skilled White must have been seeing as the terrazzo flooring is still in pristine condition after so many years.

The walls consisted of natural ash paneling and White had also installed an intricate, impressive network of underground ductwork. While Bates was living in the home, it included pops of retro colors including a teal kitchen and an orange lounge chair in the living area. Some exterior walls were painted eggshell blue and many of the shades covering the large windows featured various hues of yellows. The living area featured a standalone fireplace as well.

Bates moved out in 1962 and the house was later occupied by various individuals and even sat vacant for some time, which left it vulnerable to structural damage as well as residents possibly deciding to change the layout. In 2017, the Palm Desert Historical Society started a petition to “Save the Wave” and get it designated as a national landmark. The society was able to raise enough money and the petition was granted, meaning whoever purchased the home could not demolish it and lose the architectural gem. In 2018, Stayner Architects purchased it for $360,000 at a public auction and spent two years restoring it alongside the O’Donnell Bros. Construction company.

The architects analyzed original blueprints and historical articles and information about the house to restore it to its original look. The majority of the add-ons that had been built after Bates inhabited the home were demolished and spectators can now fully see the “wave” roof the way it was when he was living there. The Wave House now serves as a full-service event venue that includes indoor and outdoor gatherings, catering, and other event offerings.

Interested in other iconic architecture like the Bob Hope House, Leonardo DiCaprio House, or Frank Sinatra’s Twin Palms house? See these homes and more on a modern architecture tour today.