This home has seen its share of problems. Could it be cursed?

Compared to a volcano, spaceship or a mushroom, this is the house everyone talks about. 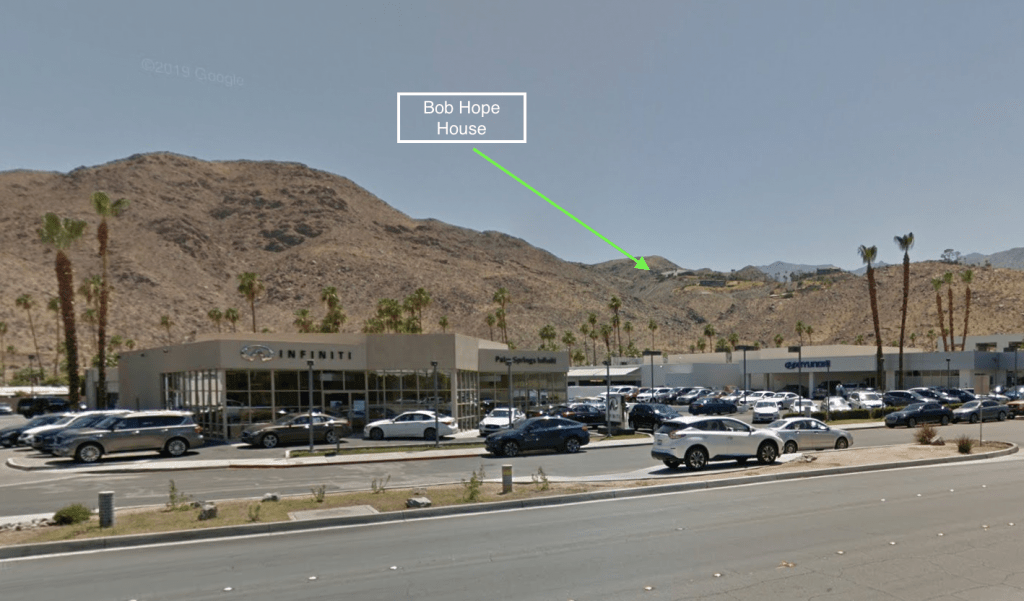 Perched at the highest point of the famously exclusive Southridge community on the edge of Palm Springs’ sprawling Indian Canyons sits the iconic and timeless residence at 2466 Southridge Drive (the gated community is inaccessible to the public), which was once the home of film and television comedy legend Bob Hope. Bob Hope is so well-known that he was given the Guinness World Record for being the “most honored entertainer in history.” Not only is he known for his dancing, singing, and acting gigs, he is also identified with magnificent houses, including the one that even today bears his name, the Bob Hope House.

Coupling the famous architect John Lautner’s California Modernist style with the powerful natural shape of a volcano, the building’s vast copper roof slopes upward from three points to meet at a crater-like circular skylight opening over the home’s spacious interior terrace. Wedged between each of the three slopes is a massive rounded concrete shell-like arch hanging over the home’s three entrances and patios, each with enormous glass windows that provide spectacular views of the Coachella Valley, city of Palm Springs, and San Jacinto Mountains.

In 1973, at the height of his fame, he was commissioned to build the Bob Hope house by Bob and his wife, Delores, on a 6-acre plot of land. Unfortunately for them, the home burned down while under construction. Why, how bad was it and what happened next? If you take our Celebrity Tour, you can find out! The massive house was finally completed in 1979. The 23,366-square-foot home is the largest ever designed by Lautner, who apprenticed under legend Frank Lloyd Wright before becoming a prolific commercial building designer in California as well as a popular residential architect amongst the Hollywood crowd.

Beyond the Hubbard-commissioned hotel property now known as the Lautner Compound and the Bob Hope House, Lautner’s other notable work in the Palm Springs area is the Elrod House, a 8,900-square-foot residence constructed in 1969 for interior designer Arthur Elrod. 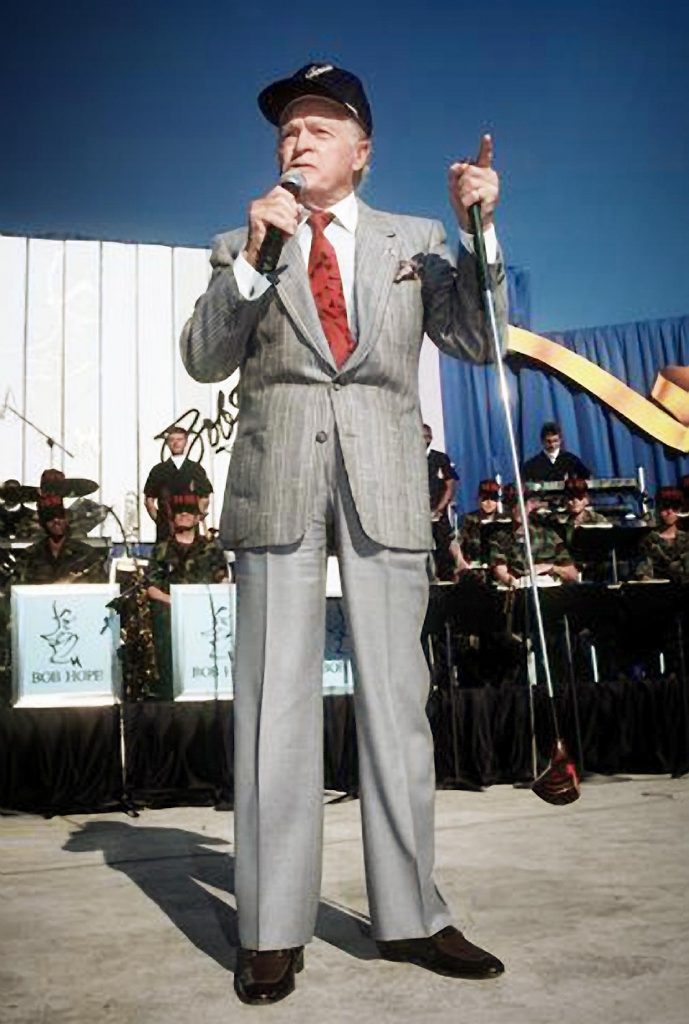 This home is famous for its appearance in the 1971 James Bond film Diamonds Are Forever. Lautner, who passed away in 1994, was posthumously honored for his contributions to Palm Springs architecture with a star on the Palm Springs Walk of Stars in 2017.

Although the Bob Hope House was inspired by the shape of a volcano, the building has often instead been compared to a giant mushroom, or, less flatteringly, a downed alien spacecraft. The home has been compared to a country club since it is so large and has so many accommodations and perks. In all, the house and grounds feature a large central terrace (complete with a legendary natural rock boulder jutting into it), six bedrooms, ten full bathrooms and three half bathrooms, a glass-walled dining room, indoor and outdoor pools, as well as an outdoor tennis court and putting greens.

Although the building was Lautner’s largest ever, it was not a favorite work of his. Lautner effectively disowned the project. Why? Our Celebrity Homes Tour takes you through the dispute that led to Lautner disavowing all connections to his largest home.

A quasi-retired Bob Hope was in the twilight years of his Hollywood career but still avidly touring when the house was built. It was his third home in Palm Springs, and he and Delores used it mostly as a secondary residence and space for hosting parties and entertaining guests. The interior terrace is capable of accommodating groups of up to 300, and the Hopes certainly made effective use of the space, especially each January when they would throw a grand dinner party to celebrate the close of the Bob Hope Classic golf tournament. These parties featured a large buffet laid out on the central terrace and never failed to included Delores Hope’s famed antipasto salad, which she always made herself. To keep out cold weather while letting party guests enjoy the view, a clear tent covering was put up on the central skylight. 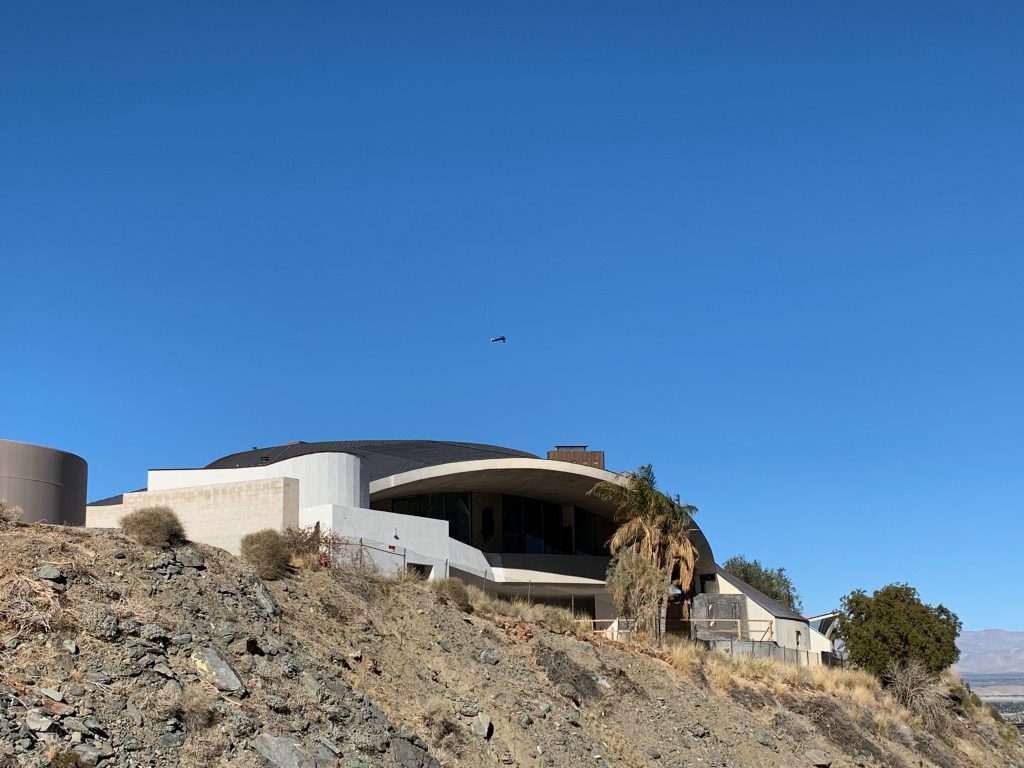 Bob Hope passed away in 2003 at the age of 100 followed by Delores eight years later in 2011. Two years after Delores’ passing, John Lautner’s Bob Hope House went on sale to the public for the first time ever, priced at $50 million. It sat on the market for years and years. What happened next? Learn the story behind the home and its current status on, you guessed it, our Celebrity Homes Tour.