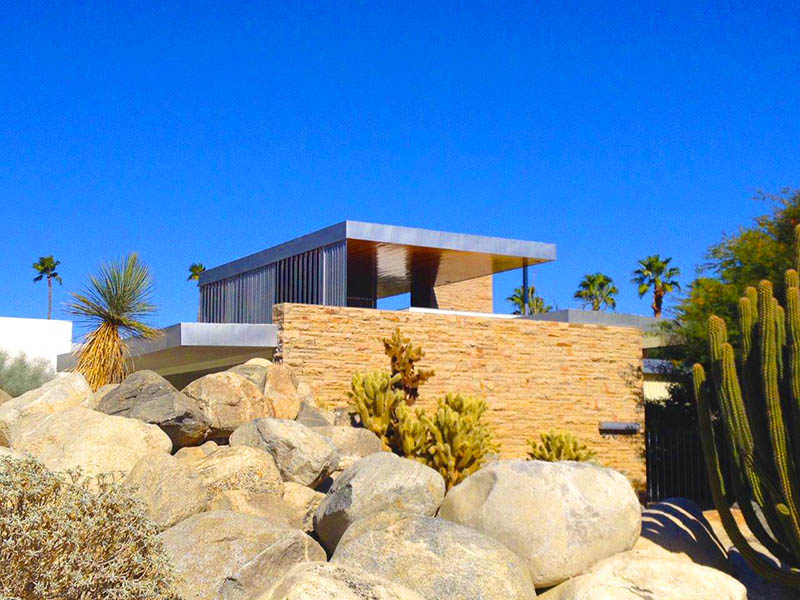 Palm Springs, California undoubtedly has some of the most lavish and beautiful homes in North America. A visit there is like being transported back to the Golden Age of Hollywood where you may just find Bing Crosby playing a round of golf or Marilyn Monroe sipping a martini by the pool. The area has remained landmarks of historical, modern architecture, and the Kaufmann Desert House (or simply “Kaufmann House”) is no exception.

What is the Kaufmann House and why is it significant?

Edgar J. Kaufmann, Sr. was a Pittsburgh department store tycoon who commissioned the home in 1946. It was initially intended to be a winter retreat for his family from the unforgiving Midwest and East Coast winters, but it ended up becoming one of Palm Springs—and modern architecture’s—most important landmarks.

Kaufmann had a history of commissioning remarkable homes. A decade earlier he employed well-known architect Frank Lloyd Wright to build his Pittsburgh home known as Fallingwater.

A small amount of controversy came about with the commissioning of the Kaufmann House when Austrian architect Richard Neutra was hired to do the job instead of Wright. Wright was very offended at his choice, but Kaufmann was looking for something that fit his new desert landscape and felt Neutra would be a stronger choice.

Who is Richard Neutra?

After immigrating from Austria, Neutra started his career in America working for a series of well-known architects. Interestingly enough, Wright himself was one of his colleagues. His career took off and his work in Southern California began after an old classmate, Rudolph Schindler, encouraged him to move there. Schindler is best known for 1929’s Lovell House in Los Angeles, which is believed to be one of the first steel-framed homes in America and is celebrated for its extensive glass windows and cable-suspended balconies. Not surprisingly, Richard Neutra became famous for designing his houses in the International Style, using a great deal of glass and metal in his projects—just what Kaufmann was after to better observe the desert environs. Following the end of World War II, he was commissioned for the Kaufmann house, and it later became a beloved piece of the renowned International Style architecture he was known for.

The birth of modern architecture had originated in the early part of the 20th century in Europe. Architects such as Frank Lloyd Wright and Neutra were the first to introduce the style in the United States starting in the 1920’s. However, it wasn’t until after World War II that it saw its rise in popularity, with the escalation of more industrial materials being used in construction. The style was based on the use of new production technologies that generally included steel, concrete, and glass. It also used cleaner, more fluid lines that harmonized with its surrounding environment. This fluid architectural style is what Richard Neutra used to create the Kaufmann House.

Where is Kaufmann House and how can I see it?

Kaufmann House is private and it’s never been known to allow visitors. Unfortunately, only glimpses of it can be seen from the street including its famous ‘gloriette’ roof deck.

Located at 470 West Vista Chino in Palm Springs, California, this masterpiece of architecture was designed to connect residents and visitors to the beautiful surrounding desert, letting the outside in and vice versa. The two-story, five-bedroom, five-bathroom, home was built in a pinwheel design with low horizontal planes that bring the house closer to the desert landscape, giving the illusion that it is floating amongst the mountains. This illusion is emphasized by the use of sliding glass doors that open up to the walkways and patios. The effect the glass doors give to the Kaufman House is that when they are opened, the interior and exterior become a singular flowing space.

About Kaufmann House design and construction.

The surface of the home is composed of sandy-colored Utah stone and floor to ceiling windows, which promotes an even more feeling of a sinuous space. Arguably one of the most admired aspects of the home, however, is the swimming pool. The pool adds a certain fluidity to the overall design of the property, balancing the heaviness of the home with its uneven wing sizes. The house was initially built with a pool house, which has now been replaced with a pavilion that serves as a convenient entertainment center and kitchen.

Another essential feature of the home is the use of the “wings.” The house is prominently focused on being east- and west- concentrated for sunset and sunrise purposes. The west wing is used for the kitchen and service rooms and the east wing is used for the master bedroom. The family and dining areas located at the center of the home are square to conform to the boxy design of the property. The plan of the house was tailored to the always-warm California climate, which at times can be rather harsh. It's boxy design, flat roof, covered outdoor spaces, and slatted metal walls all cater to the desert environment, making it a comfortable living space year-round.

Kaufmann passed away in 1955 and the Kaufmann House was left abandoned for several years. It then went through a series of several owners including famed singer Barry Manilow and Eugene V. Klein, who was the owner of the San Diego Chargers. During this time, it also underwent various interior and architectural changes without any thought of preservation from any of the ensuing owners. The roof was altered to add air-conditioning, wallpaper was put up in the bedrooms, and a wall was torn down in the living room to add additional living space. Following its stint with Hollywood’s best, it was again left vacant for several more years.

The Kaufmann Desert House was saved in 1992 when it was discovered again by a married couple named Brent and Beth Harris. Brent, an investment banker, and Beth, an architectural historian, found the house was for sale when Beth had snuck onto the property to take a closer look at the historic landmark. They decided to purchase the home and paid $1.5 million for the property. The original plans for the property had never been replicated and Neutra had died in 1970, so they went on a journey to restore it back to its original glory.

The couple enlisted Los Angeles architects Leo Marmol and Ron Radziner to restore the property. They started at the extensive Neutra archives available at UCLA and were able to pull out some never-printed photos of the interior of the property. They also were able to get some of the original paint and fixture supplies to recreate the exterior. Additionally, they more than doubled the property size by purchasing several adjacent properties to add to the Kaufmann property and brought it to Neutra’s initial vision. In 1996, it was the twentieth building to be designated as a protected local landmark and is believed to be the first private property to be selected as such.

The couple remained in the house until their divorce in 2008. To continue their efforts of preservation, they decided to put the house for auction at Christie's auction for high profile, contemporary, art. They believed that only serious buyers interested in continuing the preservation of this historical site would purchase the house at an auction. The house sold at auction for 19.1 million dollars by an anonymous buyer but later fell out of escrow. To this day, only a precious few have seen the inside.